Brands are increasingly leveraging Facebook to promote their Black Friday offerings, with a massive increase in impressions of 50% from 2017 to 2018. We looked at Black Friday campaigns on the BrandTotal platform for the first three weeks in November, through midnight on Thanksgiving, both last year and this year. (Nov. 2-23, 2017 and Nov. 1-22, 2018)

The huge growth in impressions (and spend, of course) has happened in parallel with just an 8% increase in the number of advertisers, which means that advertisers are spending a LOT more of their budgets to get their message out to their target audiences.

Use of Facebook to promote Black Friday has grown significantly in the past year.

Interestingly, while impressions exploded year-over-year, the top ten marketers for Black Friday have gone from a total of approximately 40% of share of voice in 2017 to less than 30% total share of voice in 2018, so even though they are spending more, it has become harder to stand out since the competition for eyeballs is increasing. Also, you may notice that the vast majority of the top advertisers are traditional brick and mortar and more traditional brands (with the exception of Amazon and a few others). This is not a coincidence, since B&Ms tend to follow a more traditional seasonal strategy, where the digital natives are less tied to convention and are “always on.” 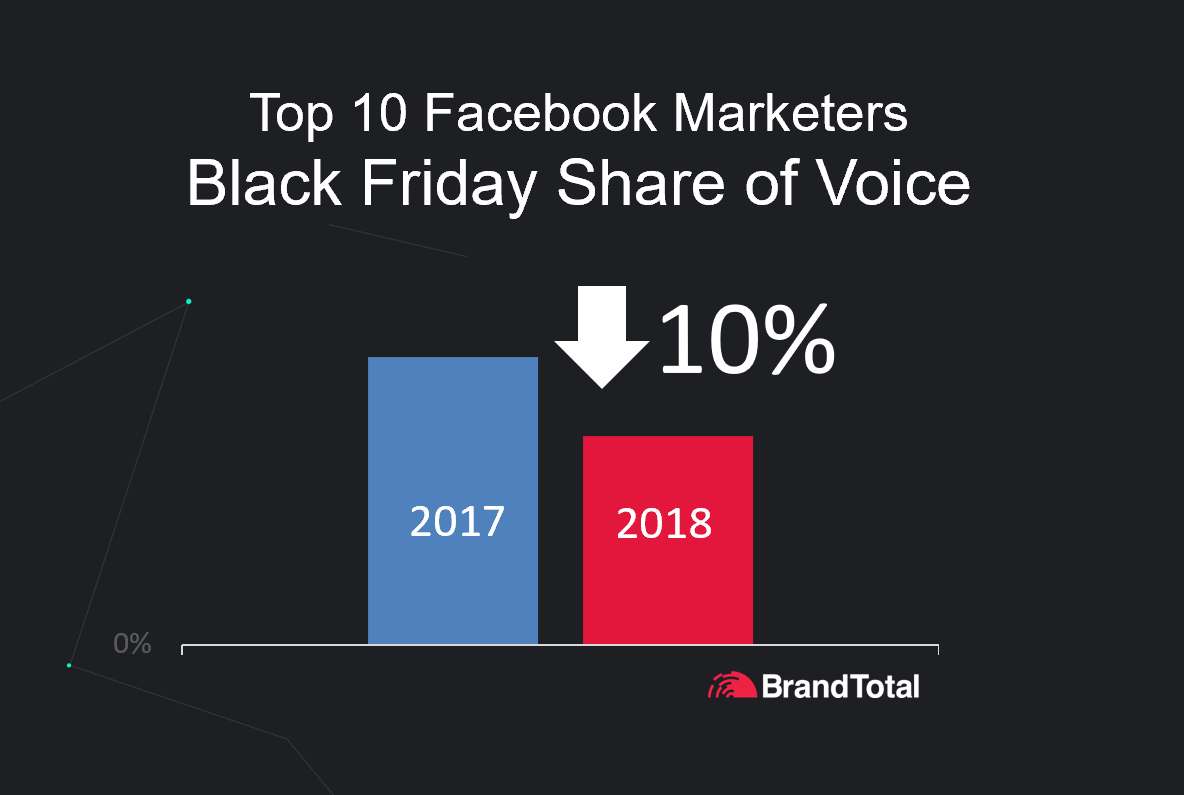 So which brands are spreading their message via Facebook? Not surprisingly, the #1 advertiser in terms of share of voice (i.e. overall number of impressions) both this year and last year is… drum roll please… Amazon. However their share of voice dropped from a massive 21% in 2017 to “just” 8% in 2018 (still huge, considering how many posts they are competing with).

The #2 spot in 2017, Walmart, with 6% share of voice, dropped to 8th place in 2018, with a mere 2% share of voice. The #2 spot this year is held by Digital Native HelloFresh, with 4% share of voice, after not appearing at all in the top ten for 2017. I guess after all that Thanksgiving cooking they figure people will want to start ordering meal kits. 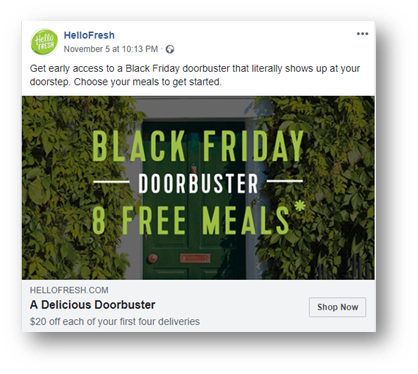 HelloFresh's 2018 Black Friday ad with the most impressions

Best Buy took the #3 spot both last year and this year, with 5% share of voice last year and a slight drop to 4% this year. Interestingly, if we look at the ads with the most impressions from 2017 vs. 2018, Best Buy most heavily promoted a carousel ad in 2017 featuring gadgets like a 43” LED and Dell Inspiron Laptop, however in 2018 the top number of impressions for their Black Friday campaign is a futuristic ad showing a drone carrying a package through the night sky, with the caption “It’s finally happening. Get free shipping.” Of course they also are featuring gadgets in other ads running in parallel to the drone campaign, but gone are the 43” LEDs from 2017, now Best Buy is promoting 65” LEDs (every year bigger and better!) 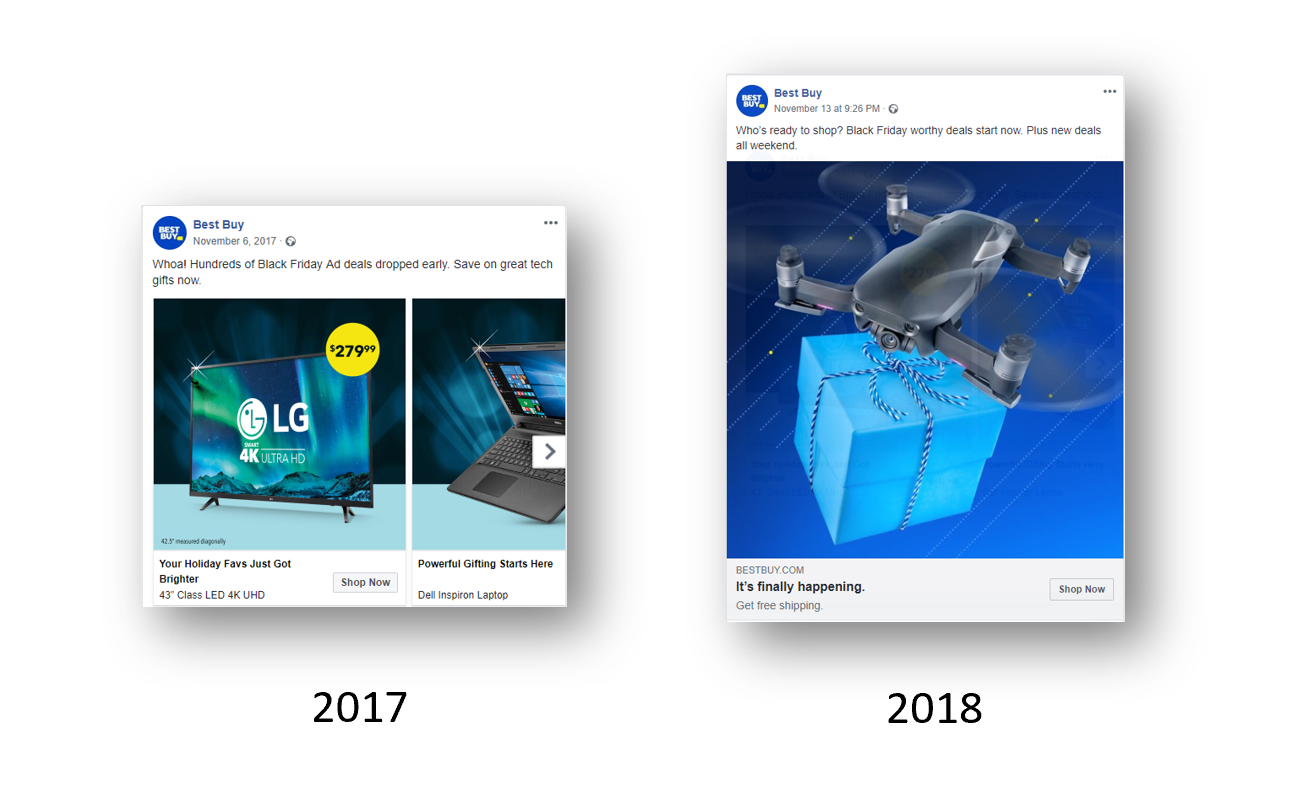 Some of the companies that appeared in the top 10 last year but dropped off this year include Nissan, jewelry designer Lisa Leonard Designs and Macy’s.

Newcomers to the top 10 include: The Home Depot, and Xbox, each with 2% share of voice and Shutterfly with 1%. 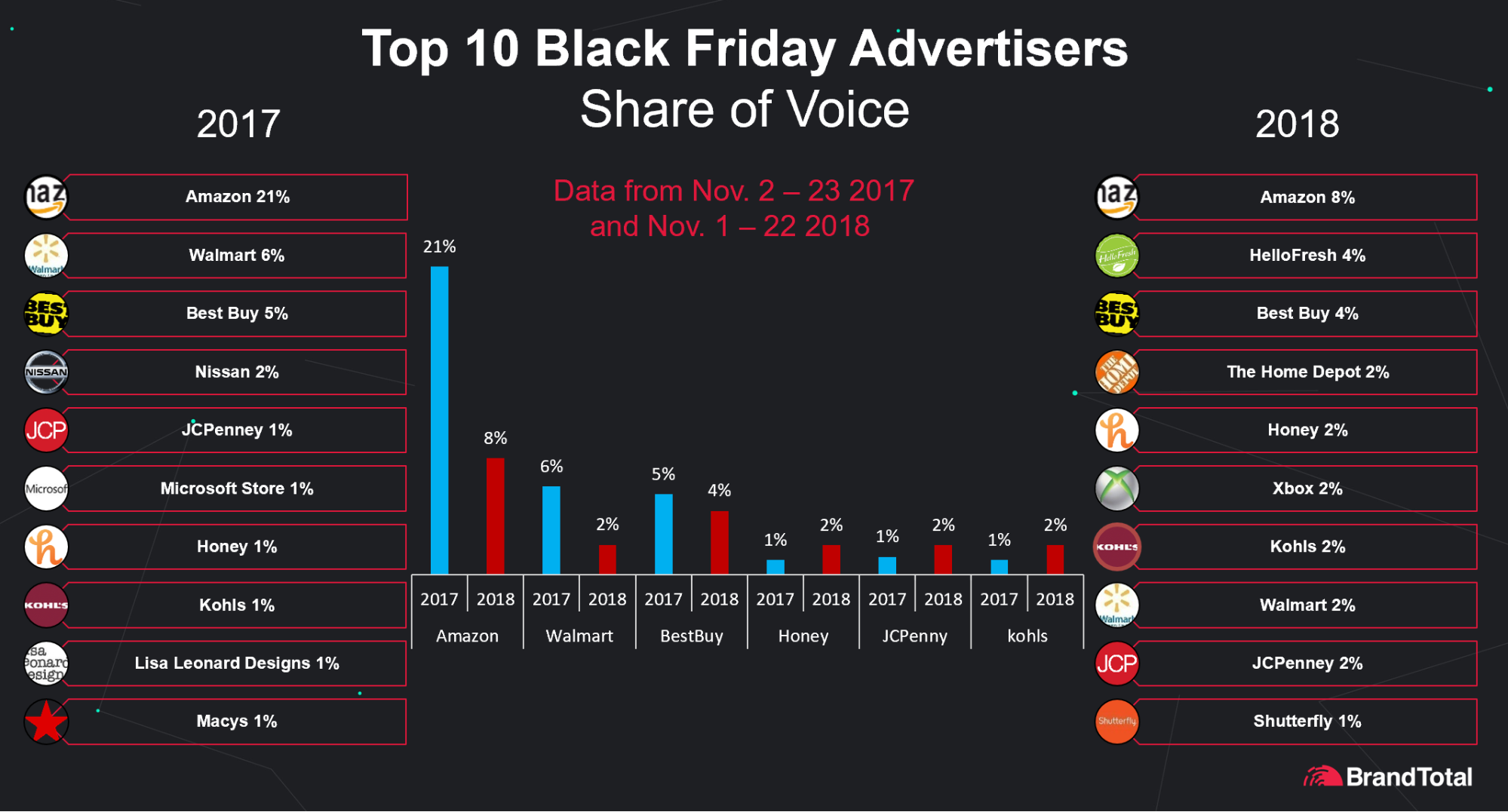 2) Focus your efforts on your target audience. No need to waste budget and effort on people who are not in your defined audience, as chances are you will be competing against lots of other brands you hadn't even considered. Put your best foot forward for your specific audience and you'll get the best results for your investment.

3) Consider branching out to other channels. Facebook isn't the only place your people are hanging out. Depending on your brand and audience, you should consider Instagram, YouTube, Twitter, Amazon and display ads, and compare the results to ensure you are leveraging your budget to its maximum.

Incidentally, we chose to focus on Facebook for this post since it’s one of the leading channels for Black Friday campaigns, but let us know if you’re interested in a similar analysis of another social channel - we’ll be happy to explore that in another blog post.

This note is visible on the content editor only.
CTA Disabled: The CTA section is currently disabled on this post. If you click into the sidebar (the ">>" icon) you will see a field called "Post CTA - Enable". Click into it, enable it, click on "Apply changes" and the CTA section should appear instead of this note.
The author information is automatically populated from the "Settings" tab. You can update author information here.
About the Author
Rebecca Herson
Rebecca is a B2B marketing expert, experienced in both strategic and tactical marketing planning and execution and headed marketing at three "Deloitte Fast 50" companies during their heavy growth periods.
View all posts