How Insurance Companies Use Paid Social to Stand Out

In this post, we look at U.S insurance companies — from established brands like Allstate and GEICO to newer players such as Lemonade and Hippo — discovering their strategies, tactics, and results of paid social advertising.

U.S. insurance companies are each vying for a piece of the $1.2 trillion insurance market. With significant media budgets ready to be deployed, there’s no question that the battle has shifted from traditional media to social media platforms.

Deloitte has highlighted the intersection of insurance, social media and social commerce, which can launch insurance companies to even loftier heights — for those that understand it and leverage it correctly.

Supporting innovation by gathering customer insights and real-time competitor intelligence is so critical. In this hyper-competitive and lucrative market, knowing what competitors are doing unlocks massive value and gives brands with this understanding a tremendous competitive advantage. With brands in this space using targeted, “dark” paid social media posts to target specific audiences with a particular message, these competitive insights have been all but invisible to the public — and competitors. Until now.

In terms of paid social Share of Voice (SOV), Progressive dominates the competitive landscape, with almost half of the paid social SOV for the category. This is followed by Geico, StateFarm, Allstate and Liberty Mutual. Interestingly, none of the “digital-native” brands appear in this Top 5 list.

Fascinatingly, GEICO and State Farm were able to leverage only 16% SOV and 10% SOV respectively into more than double the engagements of Progressive with its 44% SOV.

Digging deeper, we see what types of paid posts are driving GEICO engagements. Their top-engaging posts show extremely savvy usage of social media. For example, their Monday Motivation campaign with DJ Khaled generated millions of views and thousands of likes and comments.

Other top-engaging campaigns include non-typical but instantly recognizable celebrities such as John Stamos and Idina Menzel.

As we’ll see in the Sentiment section, GEICO are masters at creating campaigns that connect to users, that people love, and this then creates an aura of love around the brand itself.

Looking deeper, we can analyze the sentiment around these brands’ campaigns and discover the drivers of positive and negative sentiment.

For GEICO for example, not only is the company’s actual brand name associated with positive sentiment, but words like “love,” “beautiful,” and “funny” also resonate with consumers.

Typical comments include the following on their humorous Ratt campaign include “As a Geico customer for over 10 years I absolutely love the RATT commercial Rock On✌” and “Gotta love that Ratt have senses of humor about this, we can all use a laugh these days. :-)”

Contrast GEICO’s performance with that of Farmers:

For one thing, note how much negative sentiment there is around the brand itself. Angry comments include “Former employee of Farmers, stay away!! Joke from start to finish!” or “From my experience, this is one big lie — they are no where near competitive — don't fall for it. I know because I was a farmers agent.” Even their ads receive negative reviews. This one on “Accident forgiveness” has comments such as “So you crashed your car through a brick wall and ran over a couple kiddies playing bumper cars? Don't sweat it! With Farmers, your insurance rates will stay right where they are.”

Other terms lighting up the Sentiment Cloud for negativity include “expensive,” “scam,” and “money.”

Some brands featured here have much to learn. For one thing, something as simple as answering negative comments on paid social media campaigns – especially when these are dark campaigns aimed at a very specific audience – can have a huge impact. Nothing says “social media dysfunction” than an ad or campaign with a string of negative comments and no input from the brand.

With the majority of these messages being dark and not observable by the general public, all of this visibility was made possible by the BrandTotal platform. Unlock full visibility into all of the BrandTotal insights on the ad secrets of the insurance industry in the full report. 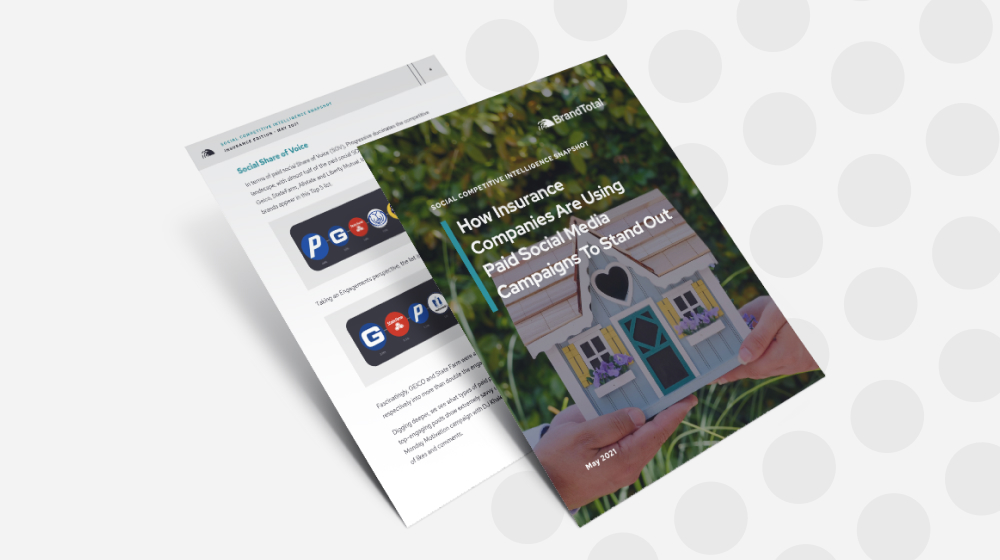