The title is automatically populated from the "Settings" tab. The subtitle is set in the modules sidebar.
If you click into the sidebar (the ">>" icon) you will see a field called "Subtitle". Click into it, write your subtitle, click on "Apply changes" and it will appear here and on the listings page.
Trend

BrandTotal marketing data from [June 5 - August 5, 2020] was analyzed, with a focus on music streaming services’ usage of paid social campaigns.

Music streaming services accounted for nearly 80% of all music revenue in 2019, with revenues growing to $8.8 billion.

Spotify in particular has been in the news recently, as it has been acquiring a number of influential podcast properties including Joe Rogan, Kim Kardashian West, and DC Comics/Warner Bros.

In terms of usage of paid social campaigns, the following key insights were noted:

Spending rose steadily over the period analyzed. In terms of spending peaks and specific brands: 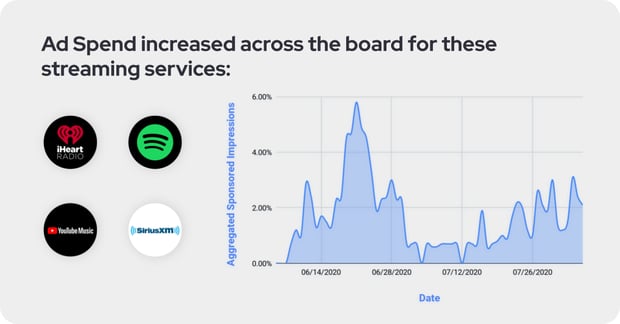 SiriusXM: in late June the brand’s Facebook dark campaign around its offer around in-home streaming had a high number of views. 81% of SiriusXM ads were dark.

iHeart Radio: there was an increase in sponsored impressions around the beginning of July, coinciding with iHeart Radio’s 4th of July campaign on Twitter.

YouTube: YouTube’s own efforts led the category to a peak in mid-July. This was driven by its dark YouTube ad “A new music streaming service”. 32% of YouTube ads were dark.

Spotify: 50% of Spotify ads were dark. Spotify’s paid social media campaign spending saw two peaks, one in mid-July, driven by its Mt. Joy campaign, and one at the end of July coinciding with its promotion of Dope Labs, both being Facebook dark campaigns.

Spotify also adds to the theme of nostalgia and highlights its playlist offering with this ad promoting previous summer hits. The ad had over 700k views.

Apple also showcases its playlist capabilities, this time in the form of a WAM (We Are Messengers) playlist featuring the band’s top hits.

Departing from the theme of throwbacks and rediscovery, Amazon Music highlighted Katy Perry’s new song in this dark Instagram campaign.

Music streaming services are using paid social media campaigns to attract users by highlighting their differentiating factors; from the artists hosted to features like curated playlists.

Want more data about this?

Download our latest report for a snapshot of the top spenders and ads in the Music Streaming space.