In June 2021, BrandTotal surveyed 1,000 U.S. adults on how they interact with social media ads and how that engagement impacts a consumer’s likelihood to purchase. The study found that with the rise of social commerce, brands can influence target customers at each crucial point of the conversion funnel. Now more than ever, brand marketers must pay attention to consumer engagement, sentiment, and interaction with brand ads and a brand's competitors' ads. 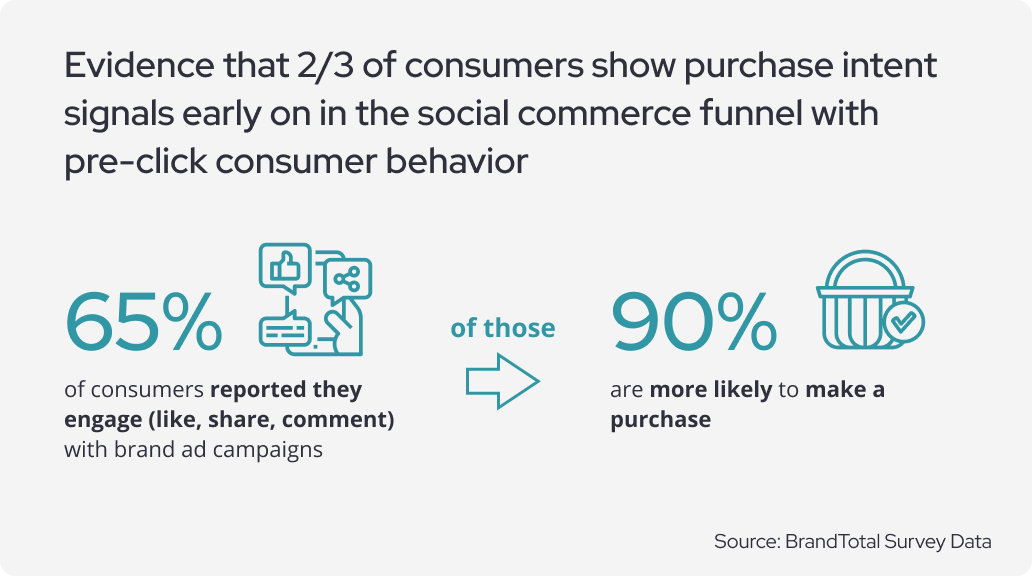 These survey results showcase that brands can affect every point in the conversion funnel for potential customers and shouldn’t measure just clicks as an indicator of social advertising effectiveness. Marketers must measure the top and the middle of the funnel, just like we measure the bottom of the funnel and pay attention to consumer engagement, sentiment, and interaction with our ads and our competitors' ads.

With the rise of social commerce and fierce direct-to-consumer challenger brand competition, there is a clear need to measure and predict social advertising effectiveness and pay attention to the earliest signs of consumer purchase intent at the pre-click level. With a staggering 90% of respondents indicating they engage, comment on, or share an ad as the first step before making a purchase, brands must take their blinders off and measure not only consumer response and interaction with their social media ads, but with their rival brands’ social ads. Paying attention to and responding to the most important early signs of purchase intent at the consumer engagement and interaction stage absolutely helps in converting to a purchase.

Understanding your category competitors matters, because it leads to better media campaign flighting, and allows the media execution team working on behalf of a brand to strategize targeting to improve conversions and ROI. Insights into what the competition is doing via a marketing technology dashboard is essential for today’s CMOs and brand managers. And BrandTotal can help.

If you’d like to uncover actionable insights into your competitors’ paid social media strategies and advertising secrets to optimize brand impact, please request a demo today.

Alon Leibovich is the CEO and co-founder of BrandTotal. Leibovich is a pioneer in the brandtech space, empowering Fortune 500 companies to break through in the social landscape by leveraging competitive analytics. A marketing and advertising veteran, Alon spent years at leading agencies including McCann. He successfully raised $20M in total funding for BrandTotal and launched the company internationally.

The author information is automatically populated from the "Settings" tab. You can update author information here.
Connect with the Author
Alon Leibovich
The CEO and co-founder of BrandTotal. Leibovich is a pioneer in the brandtech space, empowering Fortune 500 companies to break through in the social landscape by leveraging competitive analytics.
This note is visible on the content editor only.
CTA Disabled: The CTA section is currently disabled on this post. If you click into the sidebar (the ">>" icon) you will see a field called "Post CTA - Enable". Click into it, enable it, click on "Apply changes" and the CTA section should appear instead of this note.