In an analysis of paid Share-of-Voice (SOV), which is defined by percentage of sponsored impressions, Shein won, with 94% paid SOV, compared to 3% for PrettyLittleThings and 2% for Princess Polly.

“Shein is beating PrettyLittleThings and Princess Polly soundly,” said Alon Leibovich, CEO & Co-Founder, BrandTotal. “They are spending considerable dollars in this category and outpacing their rivals.”

Princess Polly and Boohoo Most Aggressive in Courting Gen Z

Princess Polly and Boohoo were the most likely to advertise to Gen Z (18-24) on social, as almost all of their ad impressions (94%) and (90%) targeted that demographic. For comparison, 44% of percent of Shein’s impressions and 68% of Zaful’s impressions targeted Gen Z.

“Princess Polly and Boohoo were the most aggressive in going after younger audiences, with PrettyLittleThings not too far behind at eighty-five percent,” said Leibovich. “The majority of their impressions were served to people between 18-24 years old.”

“Targeting a younger audience is a strategic move by brands to capitalize on digital natives who grew up in a world of social media and ecommerce,” added Leibovich. “Younger audiences are also more likely to convert online.”

Though Zaful and Fashion Nova are lower on paid SOV, they jump to the top-3 (1 and 3) when it comes to ad engagement.

Boohoo, PrettyLittleThings, and Princess Polly focused the majority of their social ad budgets on YouTube. Here’s the breakdown: 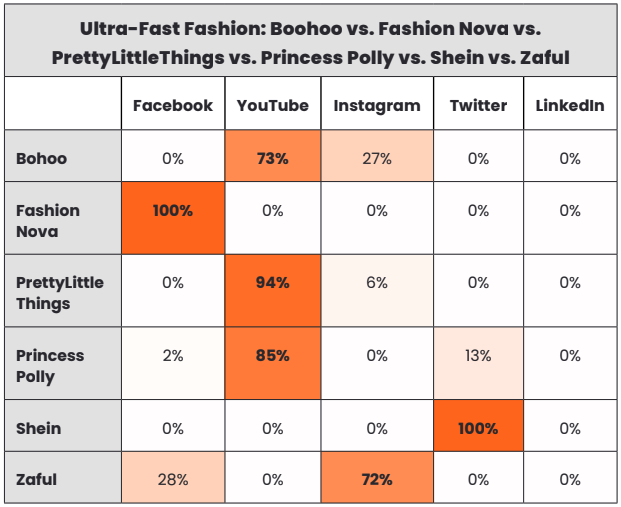 “Boohoo, PrettyLittleThings and Princess Polly have very similar social ad strategies, allocating most of their social media mix on YouTube,” said Leibovich. “FashionNova has opted for a very different strategy focusing only on Facebook while Shein focused their ad strategy solely on Twitter.”

Advertisers and agencies can sign up for a free demo of BrandTotal here: https://www.brandtotal.com/.