Super Bowl ads—whether you love ‘em or hate ‘em, as a marketer you are likely wondering whether this year’s Super Bowl ads really moved the needle for the marketers who brought these campaigns to life. While it may be tempting to judge an ad’s effectiveness based on whether it made you howl with laughter or hit you “in the feels,” we as marketers know all too well that you need quantifiable data in order to assess the impact of an ad. Now, using BrandTotal’s suite of social competitive intelligence tools, you can move beyond your first impression and get a deeper look at how brands’ 60 seconds of fame have resonated across the social space. 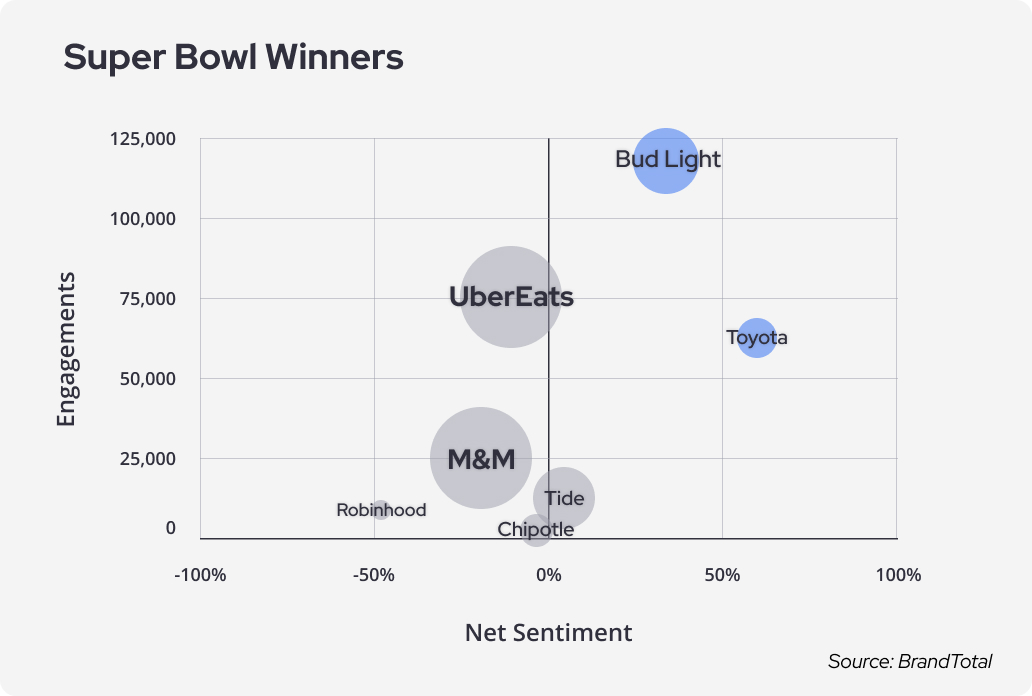 Perhaps not surprisingly, Bud Light had some of the best Super Bowl ad performance across the social space, achieving a balance of social SOV, engagements, and positive sentiment. While they were not the top spender, their strategy was Twitter-heavy (87% of the media mix) and included a significant paid media push 11 days prior to game day, teasing the commercial and encouraging consumers to enter a sweepstakes to win a 12-pack of Bud Light Seltzer Lemonade. 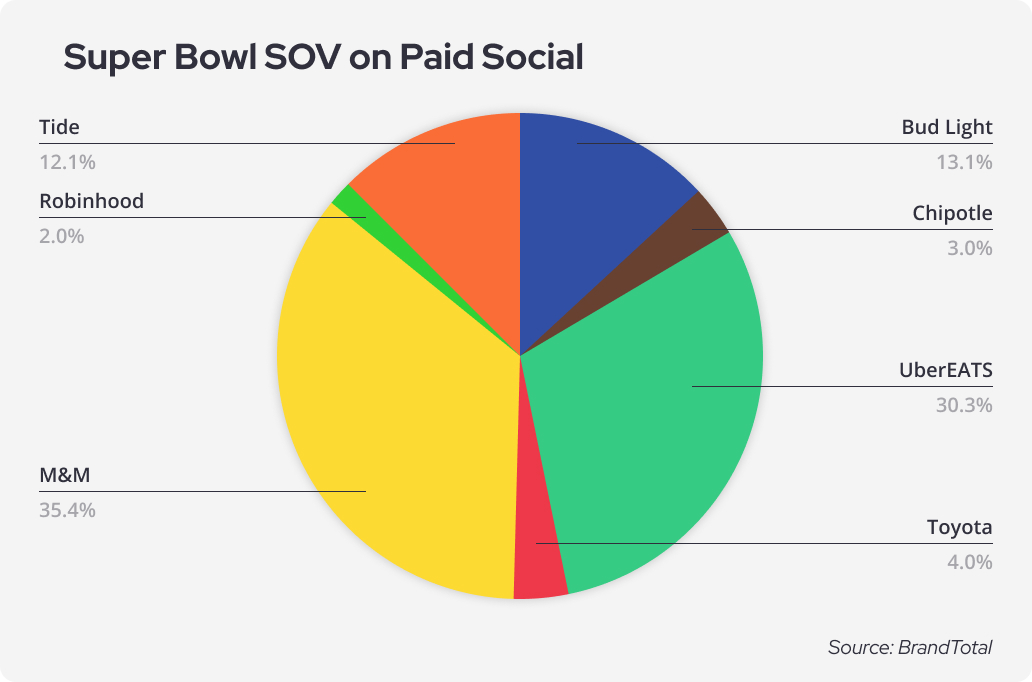 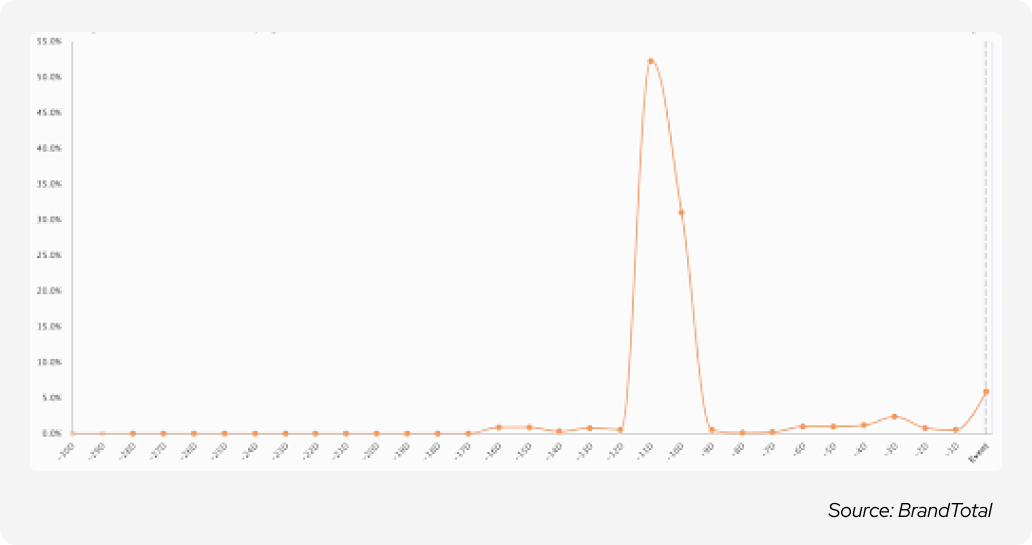 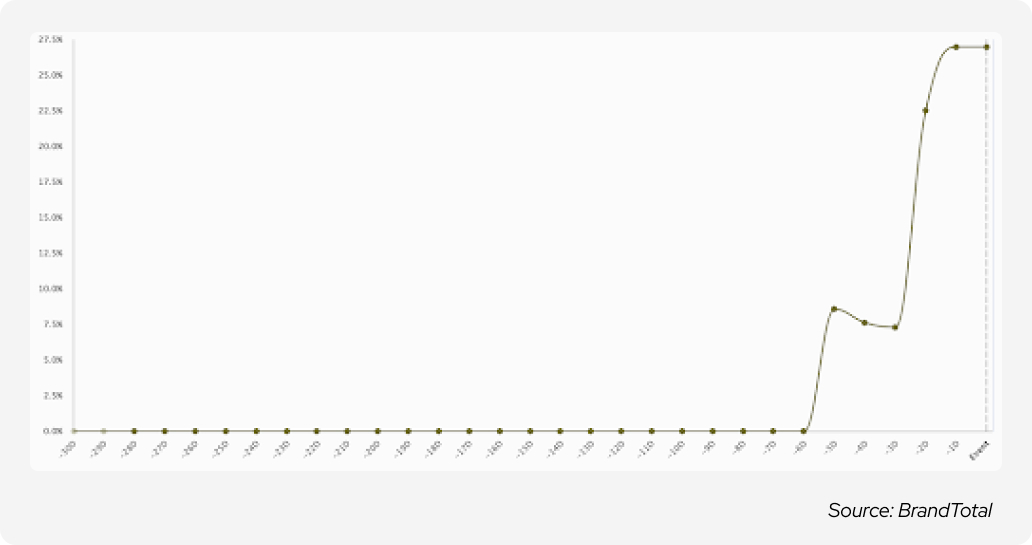 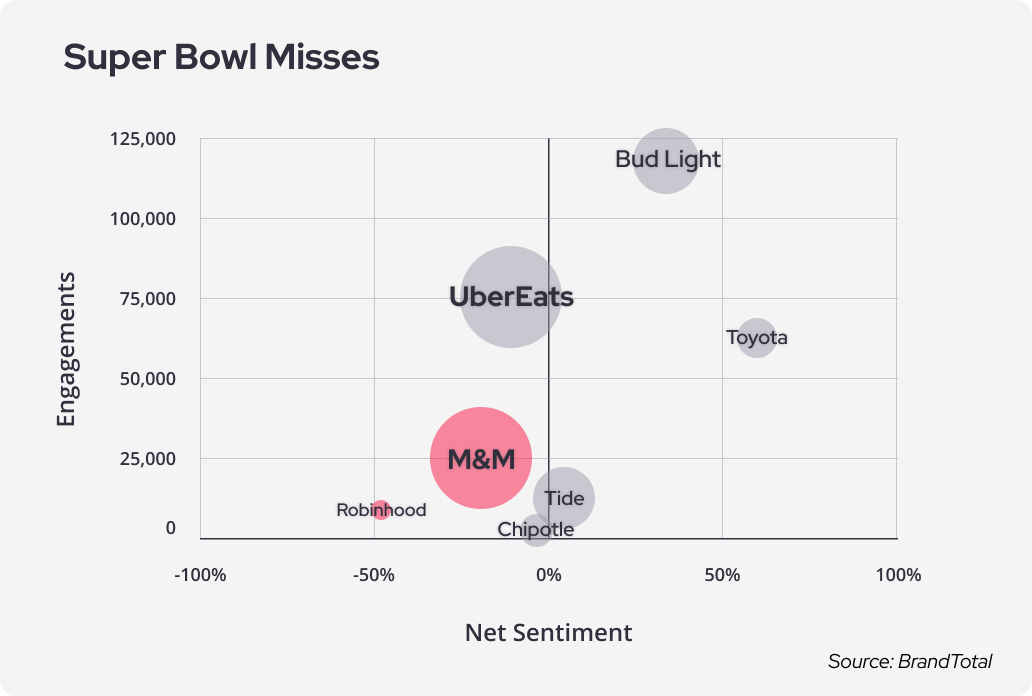 Robinhood had the lowest social SOV out of all brands analyzed, and did not allocate any supporting media beyond Twitter and YouTube. Additionally, as a result of the brand getting caught up in the Reddit GameStop controversy, the ad itself made little difference in the domain of public opinion. 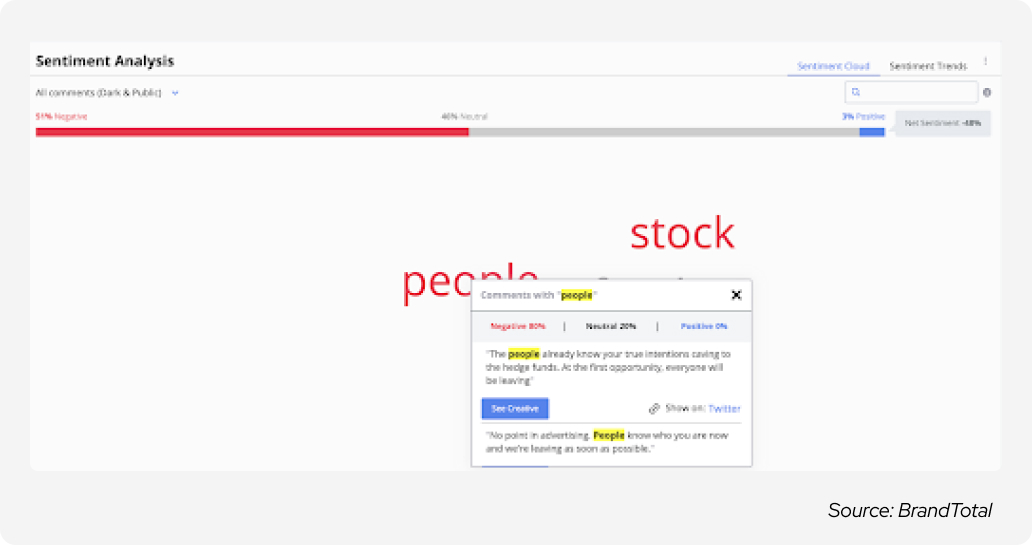 M&M was one of the most significant spenders of Super Bowl on social (35%), but fell victim to creative wearout. The brand had one of the longer paid lead times out of all brands that advertised, and had the highest volume of Organic leading up to the premiere of their Super Bowl commercial.

M&M had one of the longest creative lead times out of all brands in the category: 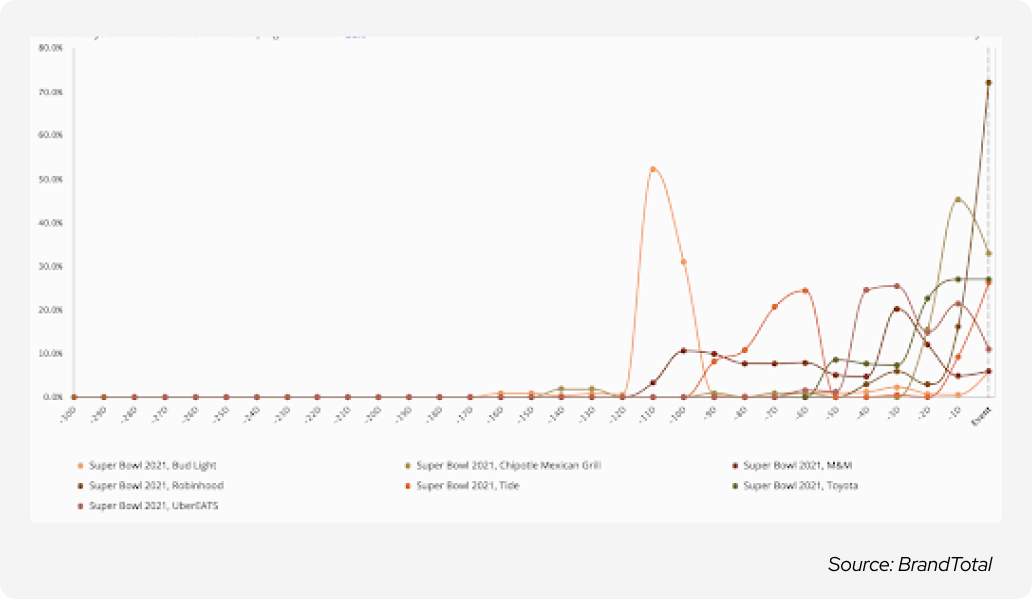 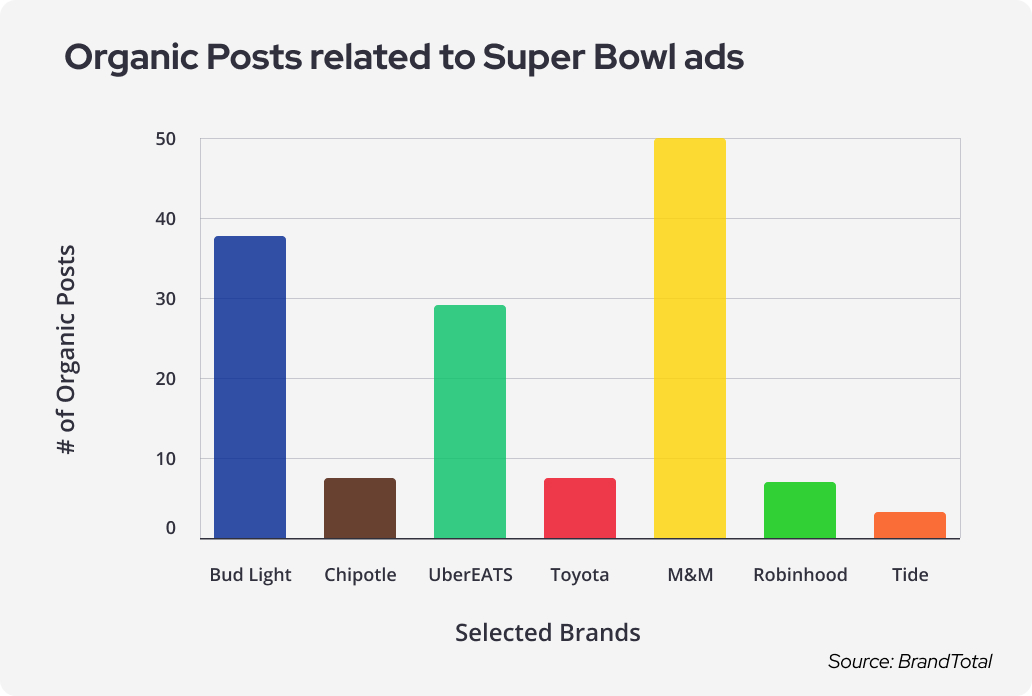 M&M also managed to hurt its Net Sentiment score for the “sorry I called you Karen” joke that was made in the Super Bowl commercial. Consumers felt the Karen joke trend is worn out and hurtful, particularly those consumers named Karen. 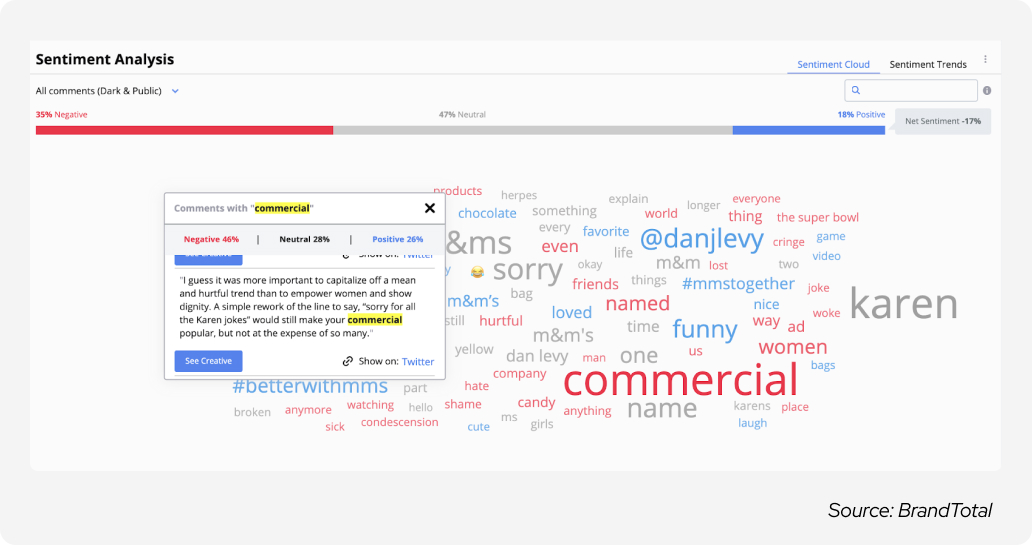 Would you like to learn more about BrandTotal and how we can help your company benchmark its brand advertising against your competitors? If you’d like to see what’s working, what’s not, and where the optimization opportunities are, please request a demo.

The author information is automatically populated from the "Settings" tab. You can update author information here.
Connect with the Author
Stacey Lawrence
Client Success Director, Team Lead at BrandTotal
This note is visible on the content editor only.
CTA Disabled: The CTA section is currently disabled on this post. If you click into the sidebar (the ">>" icon) you will see a field called "Post CTA - Enable". Click into it, enable it, click on "Apply changes" and the CTA section should appear instead of this note.