In April 2021, BrandTotal leveraged Pollfish to survey more than 500 CMOs of consumer-facing brands across America to understand how they are evaluating their advertising creative performance and impact. While the results were almost split exactly down the middle (for example, on the question what is the leading factor when it comes to a successful brand campaign, 48% of respondents said media and 52% said creative), additional insights illustrated that creative has a lasting impact on social advertising campaign performance, especially when tracking the competitive digital and social advertising campaigns of your competitors. 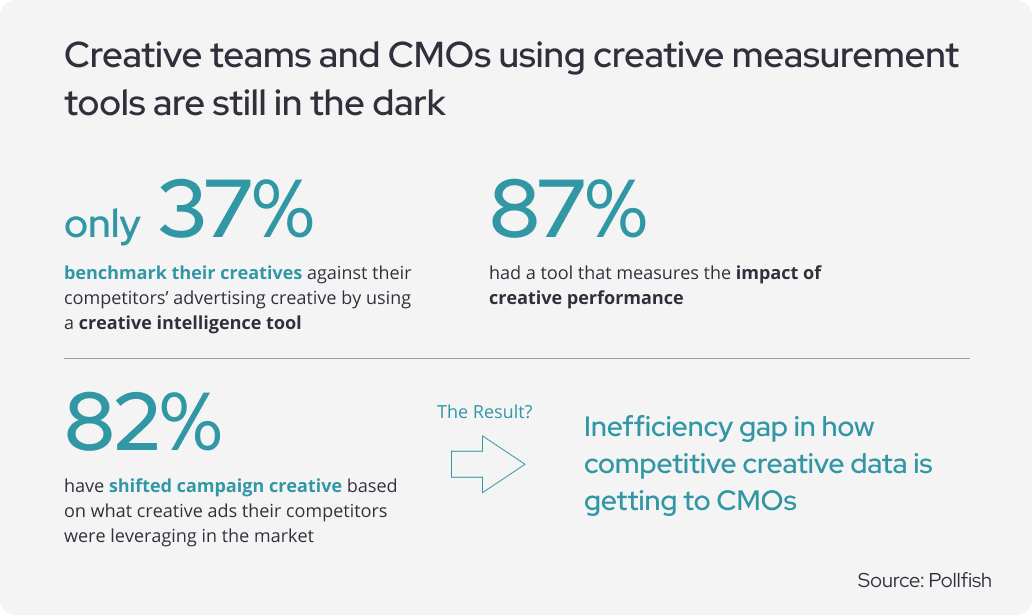 My perspective, formed by a previous role as an ad agency creative strategist, is that insights-based creative is most effective when you layer on category competitor knowledge and first-party data that is available to the brand. This will produce creative assets that stand out in the market landscape and tie back the most effectively to your brand. Leveraging brand marketing analytics and competitive creative intelligence will only make media spends more efficient, in terms of consumer engagement and sentiment and allow for better brand outcomes, making better insight-driven creatives, faster. Today’s CMOs should see this data as a wake-up call and ensure their own teams are architecting effective creative — and committing to measuring it.

Notable from the survey data is that CMOs are consistently seeing great results by shifting creative (especially if they are keeping an eye on their competitors). They are choosing to make it a manual process, and aren’t employing a tool that could provide competitor insights directly to them. BrandTotal creates a bridge between media and creative teams and ensures that marketers are supporting a message that is differentiated from competitors and resonating with their core consumer base.

Would you like to learn more about BrandTotal and how we can help your company benchmark its creative against your competitors? If you’d like to see what’s working, what’s not, and where the optimization opportunities are, please request a demo.

The author information is automatically populated from the "Settings" tab. You can update author information here.
Connect with the Author
Alon Leibovich
The CEO and co-founder of BrandTotal. Leibovich is a pioneer in the brandtech space, empowering Fortune 500 companies to break through in the social landscape by leveraging competitive analytics.
This note is visible on the content editor only.
CTA Disabled: The CTA section is currently disabled on this post. If you click into the sidebar (the ">>" icon) you will see a field called "Post CTA - Enable". Click into it, enable it, click on "Apply changes" and the CTA section should appear instead of this note.