Trump is one of the leading advertisers on Facebook and other social media, staying in the eye of his supporters with highly targeted messages to segments of the population.

Every company and everyone is a brand. Politicians have a history of behaving like brands, but now their efforts are even more quantifiable, thanks to the progress of technology and social media.

The morphosis of Donald J. Trump’s reputation over time has been quite drastic. Starting out as America’s famous billionaire turned reality television star, Trump became the most controversial brand in history – the 45th President of the United States. Trump’s triumph came as a shock to many people all over the world. How could this reality star with zero political experience surpass Hillary Clinton, when the public media’s perception and popular belief was that his opponent was a shoo-in?

During the campaign, and ever since, Trump has been one of the top participants in social media, garnering millions of impressions. His activity and impressions typically range from the top 100 to 200 of all brands globally, with more impressions in the last 30 days than each of Nike, Pottery Barn, ASOS and GoDaddy.

By looking at Trump’s online activity through the lens of BrandTotal, we quickly see that the enigma of Trump’s victory is not so shocking after all. BrandTotal’s agile marketing intelligence platform provides brand marketers and analysts with the ability to summarize a company or public figure’s competitive online strategies and performances, including dark – or hidden –  campaigns. These are the campaigns that cannot be tracked and viewed by the general population as they do not appear on the company’s public social media profiles.

While most of our customers are household brands (think cleaning products, banks, beverages, cosmetics…), we thought it would be interesting, in honor of 45’s birthday which is today, to take a look at his vast social media statistics, and we concluded some surprising facts about the Trump brand.  Here are five data driven results from the last 30 days brought to you by BrandTotal:

Contrary to popular belief, Trump’s Twitter-happy fingers are not reaching nearly as many people as his posts in other social media channels (both public and hidden/ dark).  Of all of his social media activity, only 2%, yes you heard that right, 2% (!) of his online impressions come from Twitter, with 256 tweets in the past 30 days. He’s getting twice as many impressions from YouTube with pre-roll video ads. And the vast majority of his impressions -- 79% -- are coming Facebook.

2) All aboard the Trump Train!

Trump’s Facebook activity is focused mainly on conversion, as opposed to simply raising awareness or consideration, including many polling, donating, and "signup" creatives. These types of creatives are most likely designed to rally the audience and get his current supporters even more involved.

3) Mainstream is in the Dark

Almost 90% of Trump’s Facebook posts are dark (i.e. not public) with 61% targeted at people aged 55 and up. This information displays Trump’s efforts to promote his posts and points of view to a targeted portion of his committed followers. We can also assume that he’s targeting people he assumes will be supportive since the overwhelming number of comments on his Facebook posts are either positive or neutral. Prominent words that come up in the comments include “President,” “God,” “Wall” and “Money.” 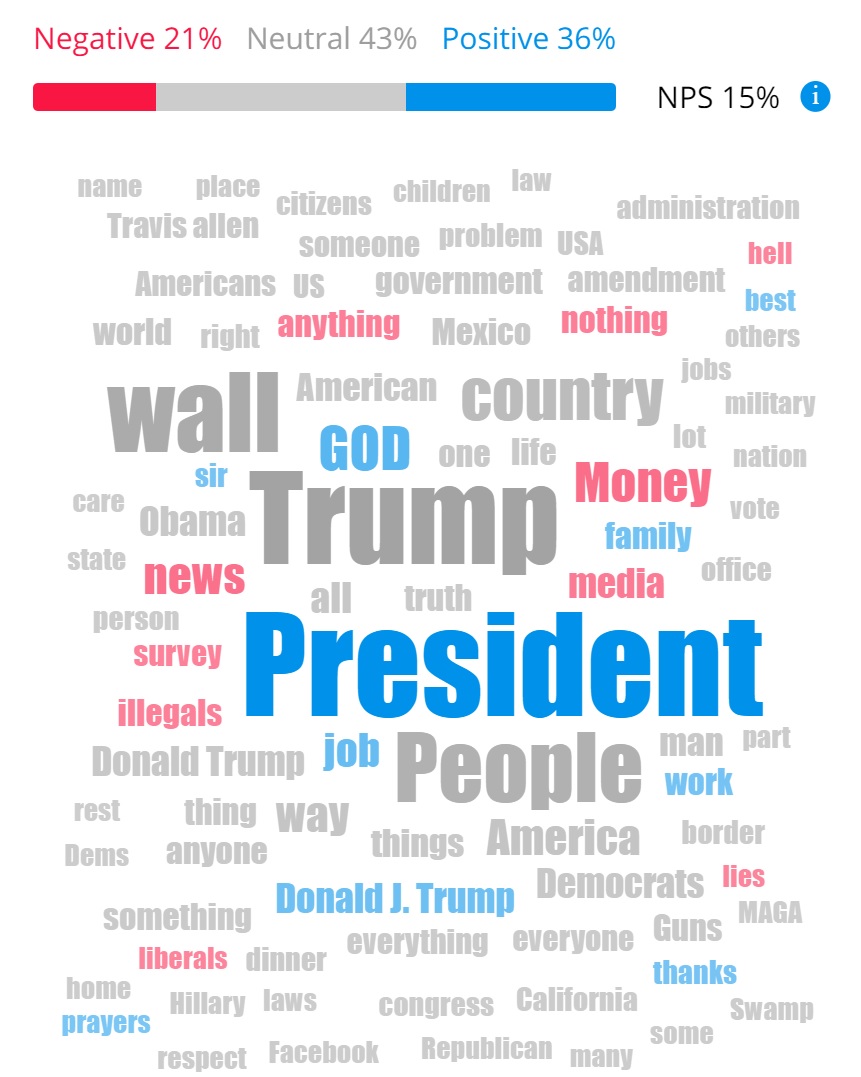 The largest percentage of Trump’s social media campaigns is promoted to the state of Florida, known to anyone who follows American politics as a swing state. In two out of three of the last elections, Florida voted Democrat, so it’s possible this is a motivating factor for him to push his message there before mid-term elections.

5) Get to Know the President

Among Trump’s top sponsored creatives on Facebook were, "I want you to enter for the chance to meet me at an important lunch I’m hosting," and “Nothing could make the President’s birthday better than to see your signature and warm wishes for his 72nd birthday,” with an opportunity to sign his birthday card.  Our takeaway is that he continues to portray himself as an accessible “everyman.”

In addition to campaigns focused on having an emotional connection with Trump, a recent top campaign highlights Trump’s commutation of Alice Marie Johnson’s sentence, with a moving video of her saying, among other things, “Thank you president Trump.” Even though the top news media stories this week have mostly been about Trump’s historic meeting with North Korea’s Kim Jong-un, the Trump team apparently felt it was important to highlight an alternative story in its paid campaigns.

By taking a closer look at Trump’s online activity, including what’s happening out of the public eye and highly targeted to the segments that Trump’s team deems relevant, one can gain a clearer idea of Trump’s marketing strategy. However, even though the Internet and media feel like they are at our finger tips, it can be challenging to gain these insights without a platform like BrandTotal. BrandTotal provides a window into the digital footprint of companies’ – and in this case, Trump’s – social media and online behavior.

This note is visible on the content editor only.
CTA Disabled: The CTA section is currently disabled on this post. If you click into the sidebar (the ">>" icon) you will see a field called "Post CTA - Enable". Click into it, enable it, click on "Apply changes" and the CTA section should appear instead of this note.
The author information is automatically populated from the "Settings" tab. You can update author information here.
About the Author
Rebecca Herson
Rebecca is a B2B marketing expert, experienced in both strategic and tactical marketing planning and execution and headed marketing at three "Deloitte Fast 50" companies during their heavy growth periods.
View all posts